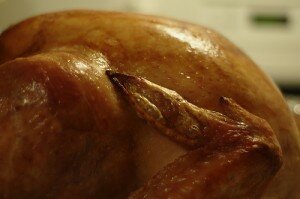 Well, it’s that time of year again. It’s time to slap-fight your siblings for the drumstick and have spoon fights over the last dollop of Cool Whip, because we all know pumpkin pie just ain’t right until you can no longer see the plate beneath the pie.

More importantly though, it’s time to look around us and give thanks for everything we have. For being blessed with an annoying brother who called dibs on the drumstick before you. For your superior health, which enables you to punch him hard enough to leave a giant bruise. For the job that you hate. You know, the job that put that turkey on the table. The job that paid your bills all year. The job that the dude in the unemployment line would kill for. Yes, I know I’m among the guiltiest in this regard. Thanks for pointing that out. Now shut your face.

So that’s what I’m here to do today: count my blessings. And since I’m such a ooey-gooey, touchy-feely, sentimental kinda guy, I’ll do so in my typical fashion. Here are the things that this trucker is thankful for. As expected, let’s start out with:

Well, there you have it; a list of things to be thankful for. Yes, I know. Heartfelt is my middle name. That’s just me.
So, what are you thankful for this Turkey Day? As soon as you get done clobbering your brother with that drumstick you stole, why don’t you pop on over to the comments section and leave your thoughts. I’d appreciate it if you’d wash your hands first. I don’t want you touching my comments sections with those greasy turkey fingers. I swear. We can’t have anything nice in this house.

I've been truckin' since 1997. Sometimes I love it and sometimes I hate it. Speaking of being fickle, my wife, affectionately known as The Evil Overlord was my co-driver for 9 of those years. And yet somehow, I'm still alive. ;-) I write a blog about a trucker's life on the road and anything else that tickles my innards. And I take myself very, very seriously. If you're still reading this, you can find me on: Twitter | | About Trucking Jobs
View all posts by Todd McCann →
This entry was posted in Truck Driver Industry and tagged annoying brother, Bruise, Consciences, cool whip, Cream Cone, Dollop, drumstick, electronic logs, evil overlord, Fast Lane, Good Folks, kitten fur, Line Thanks, Man Thanks, Medical Profession, Overspending, pumpkin pie, Superior Health, typical fashion, unemployment line. Bookmark the permalink.