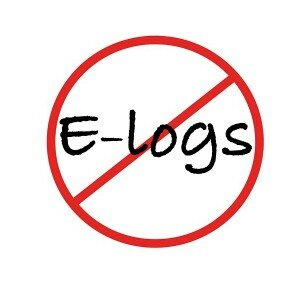 Unless something unprecendented happens in the near future (my company changes a policy for the better), this should be the last in a long series about e-logs. Now I know that you’re probably already in the midst of doing a happy little jig about this wonderful news, but let me explain why this should be the last. I can do so in one sentence. Nearly every argument I make against e-logs is comparing it to the illegal ways I can manipulate paper log books.

I’ve had questions about electronic logs before I even got them. Check out Fear and loathing of electronic logs for my initial thoughts. Turns out, most of my fears were warranted. For example, let’s take a brief look at my first run that I took while sneering at my shiny new e-log unit.

Basically, I was pissed because I figured my time wrong (a rookie mistake) and therefore delivered my load late (details in E-logs: My first impression). If I’d have still been on paper logs, I undoubtedly would have taken off a bit earlier because I knew I could fudge the log book a little bit. But the unrelenting clock on the e-log system doesn’t allow that.

Now, would I be hurting anyone if I left an hour or two early so I could avoid being in a rush and possibly have a chance at delivering early? I don’t think so. I’d had plenty of sleep. I’d been off-duty way longer than my mandatory 10-hour break required. This all makes sense to a truck driver, but try arguing this point to the authorities and you’re talking to the wind. That’s because leaving early and marking your log book after you get somewhere is illegal.

Here’s another example. One of the things that most makes me want to hand my e-log unit to my youngest nephew (that kid can destroy anything with the slightest touch) happens when I’m trying to find a parking spot late at night (find a perfect scenario in E-logs: Do they really increase driving time?).

With e-logs you have to start looking for a parking spot earlier than most drivers would like because you have to be parked when the e-log clock clicks down to zero. That means I have to start looking for a place to park at about the 10-hour mark. But on paper logs, I can utilize more of my drive time by pulling into a truck stop when my 11 hours of driving is up. If I can’t find a spot there, I just show stopping there for the night and I drive on to the next available parking. If it took me another 30 minutes to find parking, I’d just leave 30 minutes later the next day. Again, this is illegal according to the folks who supposedly know what’s best for us truck drivers.

What about how e-logs keep on counting down your time when you’re in rush hour traffic? I really hate that because when I was on paper logs I could just show that I stopped at a truck stop to wait out rush hour. I mean, what’s the difference? Either I’m creeping along in rush hour or I’m sitting in a truck stop for an hour. But again, logging yourself at a truck stop while you’re sitting in traffic is illegal.

So there’s my point. I’m trying to convince everyone that e-logs suck because I can’t run illegal like I used to do. Regardless of the fact that these illegal acts don’t really hurt anyone. That’s really what it boils down to and ultimately why all arguments against e-logs will fail worse than a 98-pound sumo wrestler.

Now here’s another side of the coin. Sometimes I’ve wanted to prove a point about e-logs, but I can’t because doing so would backfire like Elmer Fudd’s shotgun when Bugs sticks his finger in the barrel. Usually it winds up being a case of “logging it as you do it.”

First up is how we drivers log at customers (shippers and receivers). Every company I’ve worked for has crammed the phrase “log it as you do it” down my throat. Yet without fail these same companies have told me to log 15 minutes of On-Duty time (mandatory by most carriers) as soon as I get there or just before I leave. Why then? Because not doing so could totally screw up a 10-hour break and make me as inefficient as scraping your windshield with a nickel. Let me explain.

Say I pull into a receiver at 2 AM and I log myself in the Sleeper Berth. My appointment is at 8 AM. So if I’m “logging it as I do it” I should put myself on the On-Duty line for 15 minutes at 8 AM while I check in to the office and back into the dock. Then I’d put myself back in the bunk. But that would interrupt the “continuous” 10-hour break that the law requires. That means I’d have to start my break over again. So by “logging it as I’m doing it” I’d have to be shut down for 16 hours instead of 10; that’s 6 hours before I checked in and 10 hours after.

The company doesn’t want this and neither does any trucker. So in this case, I don’t want to go in and call the company’s scruples into question by saying, “Hey, Mr. By-The-Book! How come I have to log it as Driving while sitting in a traffic jam, but I don’t have to log it as On-Duty when I bump a dock in the middle of my 10-hour break?” Talk about shooting myself in the foot with an elephant gun! What if they thought about it real hard and decided I was right? Which policy do you think they’d change? Yea. That’s what I thought too.

How about the fact that the company only requires me to log 15 minutes to do my pre-trip inspection? What if it takes 30 minutes? Or 45? Well, I don’t want to waste my valuable On-Duty time, so I’m not going to “log it as I do it” in this case either. The company may say that they want you to log it correctly, but they don’t really want you eating up your hours either. Fine by me.

There is, however, one thing I won’t give up on. There is absolutely no reasonable excuse for not making e-logs editable by the driver. Most carriers realize this and have given their drivers a big ol’ pink electronic eraser. Not mine. They’ve set them up according to the DOT “suggested guidelines.” I have no words for how stupid this is.

On paper logs, we could make changes and initial them if we screwed up. With my company e-logs, changes can only be made by a member of the safety department. If no one is there to make the changes until the next morning, I’m still required to “electronically” sign my logs as “accurate” at the end of the day. Since the only button available is to “okay” it, if I choose not to sign, I choose not to move. Even if I’m fully aware I’m signing a log that I know the safety department will change in the morning. And yes, I’ve brought this fact up to the safety director. All I can say is he’d make a good politician. I still don’t have a satisfactory answer.

Am I nitpicking? Yes I am. But a driver’s log book is a legal document that can and will be used to protect or defend us in a court of law. What happens if I have an accident causing a fatality before the safety department changes my log? Yes, the chances are slim, but it is a possibility. The fact is, I shouldn’t even be put in this position. Yet I am. Okay. Now that my blood pressure is testing the integrity of my veins, I’ll just suck it up and accept the fact that my company are boneheads when it comes to e-logs. If it weren’t for the money. . .

Now let’s close this sucker up. You can now see why I’m bringing my unhealthy obsession with e-logs to a close. I just can’t win. Most truckers would agree with everything I say, but throw the argument against e-logs at the lawmakers and I’d end up looking dumber than. . . well, dumber than I actually am. And quite frankly, that’s pretty freakin’ hard to do.

*What do you think about e-logs? Have I missed something? Please leave your comments and give this post a rating while you’re at it. Thanks.*

I've been truckin' since 1997. Sometimes I love it and sometimes I hate it. Speaking of being fickle, my wife, affectionately known as The Evil Overlord was my co-driver for 9 of those years. And yet somehow, I'm still alive. ;-) I write a blog about a trucker's life on the road and anything else that tickles my innards. And I take myself very, very seriously. If you're still reading this, you can find me on: Twitter | | About Trucking Jobs
View all posts by Todd McCann →
This entry was posted in Truck Driver Industry and tagged Authorities, company changes, driving time, electronic logs, fear and loathing, Fears, first impression, initial thoughts, Jig, last, little bit, log books, midst, mistake, Nephew, Paper Logs, parking, rush, slightest touch, stop, System Doesn, talking to the wind, truck, wonderful news. Bookmark the permalink.