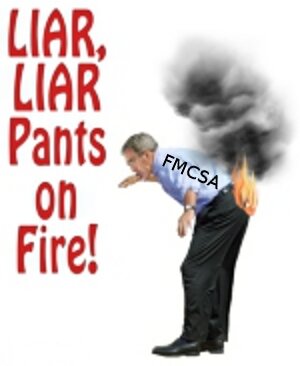 Who would of thought that the government would lie to the people to get their way?

I would have never thought that they would turn to cheating to get what they wanted.

It really breaks my heart to learn of this I am distraught tonight to find this out – I don’t know if I can go on.

If you have a good imagination please use it to imagine me sitting here “rolling my eyes.”

I am not a fan of the ATA – Anti-Trucking Association, but I was surprised today to see an announcement by them that “FMCSA Manipulates HOS Fatigue Factor” I thought say it ain’t so! My government would lie to me – to get what they wanted? It’s no wonder nobody trust the government anymore.

In an effort to rationalize a change in federal Hours of Service (HOS) requirements for professional truck drivers, the U.S. DOT’s Federal Motor Carrier Safety Administration (FMCSA) misapplied its own crash numbers so as to elevate driver fatigue as a cause of truck crashes, the American Trucking Associations (ATA) said today.

Just a thought, I would be willing to bet that the Department of Transportation has done the same thing with cell phones. We already know they took a public poll to determine if “texting and driving” by professional truck drivers should be eliminated. Guess what the people said? We have already seen their so-called report they used to determine that a truck driver was 23 times as likely to have a crash while texting and driving.

We already knew they like to “mold” reports into their favor. When the real facts are supplied to them they ignore them because the real facts tell a very different story than the manipulated reports that they use.

“Since the current HOS rules were introduced in 2003, the trucking industry has achieved a continually improving safety record, reaching the lowest fatality and injury rate levels in recorded history,” said ATA President Bill Graves “It is troubling that this complex, restrictive set of proposed rules is founded on what appears to be incorrect analysis and inflated math.”

It is very troubling to find this information out, because it only makes me wonder what else have they “doctored” for their favor?

Second, FMCSA appears to be treating any crash in which fatigue is listed as an “associated factor” as a fatigue-caused crash. That approach is not just contrary to prior research methods, it is also at odds with the Agency’s own report to Congress, in which it stated that for associated factors: “No judgment is made as to whether any factor is related to the particular crash, just whether it was present.

I’m guessing that this sort of thing goes on all the time. That is why a more transparent government is needed. Now what can we do about it?

I'm just a EX-truck driver, trying to pass along a little information. I been in the Trucking Industry as a driver for over 15 years. I have driven both as an owner operator and as a company driver. I have also been a driver instructor for an accredited truck driving school in KY. I am no longer a truck driver, but I consider myself to be a watchdog for the trucking industry. In fact this site is the #1 site for getting the real news about trucking. We don't hold back here, you will hear the full story. Twitter | |Truck Drivers News Facebook
View all posts by admin →
This entry was posted in Truck Driver Industry, trucking news and tagged American Trucking Associations, Bill Graves, Department of Transportation, different story, driver fatigue, factor, fatality, fatigue, federal motor carrier, Federal Motor Carrier Safety Administration, FMCSA, Hours-of-Service, imagination, motor carrier safety, motor carrier safety administration, President Bill, professional truck drivers, Public Poll, safety, Safety Record, texting, Today, truck, trucking association, trucking industry. Bookmark the permalink.