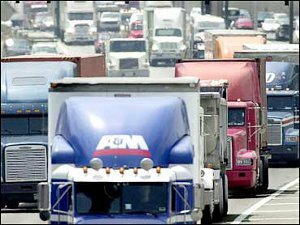 Obama said the two nations had “found a clear path to resolving” the roadblock in relations.

Obama announced that US and Mexico had reached an agreement on Cross-Border trucking.

In a news conference with Mexico’s Felipe Calderon, Obama said the plan would now be taken to Congress.

So guess what needs to be done now! Yes, that’s right get on the phones and call your senators and representatives and demand them to kill this deal now. You can call the United States Capitol switchboard at (202) 224-3121 provide the operator with your home zip code and they will connect you directly with the Senate office you request.

US and Mexican trucks were previously authorized to cross their shared border under the 1994 North American Free Trade Agreement, but the US has refused to allow Mexican trucks access amid concerns over their ability to meet US safety and environmental standards. They have admitted that they (Mexican Trucks) can’t pass the very strict EPA guidelines for trucks in the US.

The US trucking industry is strict on environmental issues that deal with exhaust from the US trucks. So strict that it put many owner-operators out of the trucking business, and caused many companies to have to renew their fleet of trucks to meet the standards also putting some companies out. Plus, it has also caused many states to impose very costly “No-Idling” laws for truck drivers – some without regard to the drivers rest necessities.

“Most trucks in Mexico, whether owned by U.S. companies or Mexican carriers, don’t meet the proposed air-quality requirements to cross the border,” said Salvador Saavedra, president of the automobile industry sector of the National Manufacturing Industry Chamber, a Mexico City business group.

Steve Russell, chief executive officer of Indianapolis-based Celadon Group Inc., which serves the U.S., Canada and Mexico said, “The theory behind cross-border trucking is that one tractor would replace three.” in a recent article. I know my math is not perfect, but that looks like it will remove jobs from the trucking industry in both countries.

The fact that a cross-border program is in any stage of development does not sit well with the Owner-Operator Independent Drivers Association (OOIDA) leadership. “With all the talk about the need for every initiative to create jobs, it’s absolutely shocking,” said OOIDA Executive Vice President Todd Spencer. “The only jobs this ill-conceived idea can create are for non-citizens who will take jobs away from U.S. citizens.”

Obama’s intentions may have been for the good, but his failed attempts are putting the US deeper and deeper in debt. And now with this cross-border trucking plan coming into the picture – he is going to be putting you and me in danger on the roads. With fuel prices going up, and “CHEAP” labor being allowed into the US by way of Mexican truckers – who do you think these companies are going to want to hire to haul their freight? Expensive US truckers – or the “El-Cheapo trucking” company from Mexico.

I'm just a EX-truck driver, trying to pass along a little information. I been in the Trucking Industry as a driver for over 15 years. I have driven both as an owner operator and as a company driver. I have also been a driver instructor for an accredited truck driving school in KY. I am no longer a truck driver, but I consider myself to be a watchdog for the trucking industry. In fact this site is the #1 site for getting the real news about trucking. We don't hold back here, you will hear the full story. Twitter | |Truck Drivers News Facebook
View all posts by admin →
This entry was posted in trucking news and tagged agreement, air quality requirements, automobile industry, border, capitol switchboard, celadon group inc, Chief Executive Officer, clear path, cross border, deal, epa guidelines, felipe calderon, home zip code, Mexican Trucks, mexico deal, National Manufacturing, North American Free Trade Agreement, Obama, owner operators, security, Senate Office, steve russell, trucking business, trucking industry, United States Capitol. Bookmark the permalink.