You are here: Home / trucking news / Ice Road Truckers Season 4 – The Dash for the Cash Begins
x **New Feature**While you are reading any single post page, you can highlight any word and a learn more button will appear click the learn more button and results will be shown to you in the same page.

Ice Road Truckers Season 4 – The Dash for the Cash Begins 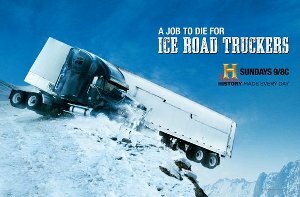 The popular TV series on the History channel – Ice Road Truckers – has returned to Alaska. The drivers Jack Jesse, Lisa Kelly, Alex Debogorski, Greg Boadwine, Ray Vellieux, Hugh Rowland have returned for the “Dash for the Cash.” They will be hauling their biggest loads ever across the most dangerous terrain they’ve faced.

Reigning “King of the Haul Road,” Jack Jesse has returned to defend his title. He was first out of the chute hauling the first over-sized load of the season to Prudhoe Bay. Jack Jesse will haul anything anywhere. But his specialty is fuel tankers and he doesn’t have any tolerance for co-workers that won’t pull their own weight – no pun intended. He is in Alaska – trucking for the money – and the challenge and says: “You learn the road really fast or you will end up dead.” Last season Jack showed all of us that he was Carlile’s top trucker – a fact that most truckers believe Jack will be the first one to remind you of. Can he do it again?

The only female driver – Lisa Kelly – returns to haul loads on the Dalton – the dangerous haul road in Alaska. Don’t let her good looks fool as she is a rough and rowdy driver who has crashed both trucks and motorcycles – but she has not been scared off the haul road. Lisa has to prove herself with every load she takes on because she is in a male dominated industry. Lisa is no rookie, but many of the drivers feel she is a lightweight and that she can’t be trusted on the road. Will she be able to prove herself worthy of being a heavy-haul truck driver? In last night’s episode Lisa had to do the unthinkable – she had to switch out trailers because of lack of experience with that type of trailer – a car hauler.

The oldest and probably the most liked driver – Alex Debogorski – returns for yet another season and the dash for the cash. He has 20 plus seasons under his belt of running on ice, but this is still relatively new to him – being in Alaska. One thing that Alex is shooting for is to have a good season and finally pass the “Polar Bear.” If you remember though in season two Alex had health issues and left early, and last season he was showing signs of slowing, but still had a great finish. Will the age and health issues prove to sideline him? Or will the wisdom and consistency allow him to stay in front of Hugh?

The young kid – Greg Boadwine – surprisingly returns after rolling his truck over, last season. This brassy kid is lucky to have a job, but still he returns to the haul road for his second season. Greg is the youngest driver and thinks he knows better than most of the drivers and thinks he can out-drive the rest. Does he have what it will take to be “King of the Haul Road?” Or will his oppressive ego write a check that he himself can’t cash?

The newcomer to Alaska’s haul road -Ray Vellieux. He was an owner-operator from Montanna and recently signed on with Carlile to work in the yard strapping down loads, after his business dried up. He has put in a few months of grunt work until a driver spot opened up. Now that he has a few loads under his belt, he was given an old truck but he still isn’t sure what he is in for. The rookie driver – with years of experience driving had to start at the bottom – again. In Last night’s episode he made a rookie mistake that almost cost him his life. Hopefully, that shocking experience has taught him a lesson.

Known as the “Polar Bear” – Hugh Rowland returns to the ice for another season. I’m guessing this is the least liked driver that Carlile has – at least in my opinion he is. He is a hard worker – but he is a hot head too. If you remember in season one all of his drivers just about quit on him. In my opinion, he takes way too many chances. But atlas he brings some excitement to the show and that sells. But after last night’s episode he was a no show he has zero loads hauled so far this season.