More of the same from Department of Transportation in 2011 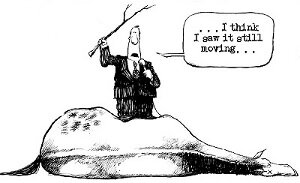 With 2010 being labeled as the year to forget, because of the most idiotic rules and regulations that have ever been forced upon trucking in general. I thought with a new year – 2011 – things would change a little, and the Secretary of Transportation Ray LaHood would focus more on the “real” issues that plague the transportation infrastructure – but it looks like more of the same is in order for 2011.

The Secretary’s main focus has been ‘distracted driving’ and he keeps referring to it as an epidemic although the Insurance Institute for Highway Safety (IIHS) says there’s no evidence that distracted driving is leading to more crashes or that laws banning texting or handheld cells are having any effect. Ray LaHood says IIHS’s research is “misleading.”

That is ironic LaHood was say that about IIHS’s report. I have said many times before the FMCSA and DOT have admitted to using general public opinion polls and a misleading report, conducted by Virginia Tech Transportation Institute (VTTI), that ONLY examined 203 professional drivers in only 55 different trucks at seven different companies out of the 4 million CMV drivers on the road.

Out of a total of 4,452 crashes, near misses, crash relevant conflict, and unintentional lane deviations – 46% “near misses” I might add – they were able to determine that professional truck drivers were 23 times more likely to have an accident while driving and texting. Near misses of course are not crashes – so how are they contributing to crash reports? – Almost half of the total in the report.

Funny how LaHood gets upset when a reputable report comes out against their good intentions. LaHood states that the Insurance Institute for Highway Safety (IIHS) and its affiliate, HLDI have been working to discredit national anti-distracted driving efforts over the last year. It makes us look bad is I can hear LaHood and others saying.

With the fact showing that LaHood placed a HUGE FINE and penalty on texting and driving for professional drivers – I would say many drivers involved in a crash or stopped by a police officer for bad driving wouldn’t acknowledge cellphone use to a police officer because they’d fear getting cited and the HUGE FINE.

In an analysis of 7,000 crashes released in September, NHTSA concluded 30% involved some type of distraction but found that of 14 sources of distraction in a car, texting while driving was the only one that was NOT A FACTOR. That is interesting fact given by NHTSA, Ray LaHood must have missed that memo.

The Transportation Department notes it studied crashes in 2005 through 2007 and the number of monthly text messages has increased from about 7 billion in 2005 to about 173 billion in 2010. This is more of the kind of BS studies that the DOT rely on, even though this report ONLY shows that text messaging has gone up – but doesn’t say whether or not it was while driving or not. The DOT and the Federal Motor Carriers Safety Administration (FMCSA) are both known to “fudge” their own reports to try and justify motives for ludicrous laws they come up with.

But anyway I just thought my readers should know that when Ray LaHood ‘beats a dead horse’ about what he thinks is a problem, that I will continue to prove that DOT is just wasting time and money.

I'm just a EX-truck driver, trying to pass along a little information. I been in the Trucking Industry as a driver for over 15 years. I have driven both as an owner operator and as a company driver. I have also been a driver instructor for an accredited truck driving school in KY. I am no longer a truck driver, but I consider myself to be a watchdog for the trucking industry. In fact this site is the #1 site for getting the real news about trucking. We don't hold back here, you will hear the full story. Twitter | |Truck Drivers News Facebook
View all posts by admin →
This entry was posted in Truck Driver Industry and tagged cmv drivers, crashes, Department of Transportation, different companies, FMCSA, Good Intentions, highway, hldi, HUGE, iihs, insurance institute for highway safety, misleading report, misses, professional drivers, professional truck drivers, public opinion polls, Ray LaHood, safety, Secretary, Secretary of Transportation, total, transportation infrastructure, transportation institute, Virginia Tech, vtti. Bookmark the permalink.