You are here: Home / Truck Driver Industry / NTSB makes Update on Crash in Kentucky that Killed 11
x **New Feature**While you are reading any single post page, you can highlight any word and a learn more button will appear click the learn more button and results will be shown to you in the same page.

NTSB makes Update on Crash in Kentucky that Killed 11 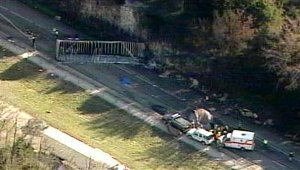 In its continuing investigation of the highway accident that killed 11 people near Munfordville, Kentucky, in March, the National Transportation Safety Board (NTSB) has developed the following factual information:

On Friday March 26, 2010, at approximately 5:17 a.m. CDT, a 76,660-pound tractor-trailer combination truck traveling southbound on I-65 near Munfordville, KY, departed the left travel lane at about a five-degree angle, crossed a 60-foot wide grass median, overrode a four-cable guardrail barrier and struck a 15-passenger van that was traveling in the left northbound lane.

The truck continued across the northbound travel lanes, overturning, struck a stone wall, and was engulfed in a post-crash fire. The van came to rest upright, facing in a southerly direction in the northbound lanes; it was not involved in any post-crash fire. The 1999 Freightliner truck in combination with a 53-foot semitrailer was operated by a 45-year-old male who was fatally injured in the accident.

The 2000 Dodge van was operated by a 41-year-old male and occupied by 11 passengers (8 adults, two children and an infant). The two children were secured in child restraint seats and survived with minor injuries. The infant, who was secured in a child’s restraint seat, and all nine adults in the vehicle were fatally injured. Eight of the nine adults were not wearing seatbelts.

The truck was on a 690-mile trip from Lansing, Michigan to Cullman, Alabama. The driver had set out from Lansing at about 4 p.m. the previous day. The accident occurred about 13 hours later with about 243 miles remaining in the trip. Investigators are trying to determine how many hours the truck driver was operating the vehicle and if he took any rest periods between his departure from Lansing and the point at which the accident occurred. The truck was not equipped with an electronic onboard recorder to document the number of hours the driver spent operating the vehicle, and the logbook in which the driver manually records operating hours was destroyed in the post-crash fire.

A toxicology test on the truck driver was negative for alcohol and nine legal and illegal drugs. At this point in the investigation, no medical issues have been found that might have led to a sudden incapacitation of the truck driver. The posted speed limit in the area near the accident site on I-65 was 70 mph. The truck departed the roadway while traveling on a 2.6 percent downgrade. No determination has yet been made as to the speed of the truck at the point of roadway departure or at the point of impact.

The pre-dawn accident occurred in nighttime visual conditions. The roadway was damp at the time of the accident from an earlier rain. Several hundred yards of the southbound lanes of I-65 preceding the point at which the truck departed the roadway were inspected and no evidence of any type of tire or other mechanical debris from the truck was found. After a multiple-vehicle median crossover accident killed five people in 2008 on the same stretch of I-65, a four-cable barrier system was installed in 2009 at the edge of the left shoulder of the northbound lanes.

The investigation is on-going and is expected to be completed in 12-18 months.