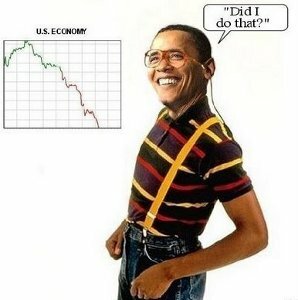 I could sum this article up with the first paragraph – but I want to show some examples. We have a so-called leader of this country who does not know how to run this country – except into the ground.

He only knows how to spend money in which he does not have. For a person who has never run anything and has no experience in leading he can only do one thing to get votes – and that is to essentially buy them.

I want to add also that I am in no-way a political expert – I really never paid much attention to politics until the last couple of years. I was like many typical truck drivers always working and really never concerned about what the country did as long as I was hauling and making money.

But now it is affecting truck drivers on lots of issues such as cross-border and rail and oil. So I started to pay a lot more attention to what was/is going on in politics and I am trying to get more truckers involved as there are almost 4 million potential voters driving trucks, and 8 million CDL holders. Also, I want to mention that there are more examples I could show, but these I feel are or should be at the top of the list.

Let us not forget to add that this has to include some freight rail service upgrades as well. The USDOT has been saying that all these “high-speed rail (HSR) projects” would help move freight faster and make us less dependent on foreign oil. But I thought the high-speed rail was for passengers to move faster between cities. But I guess it could be interpreted in different ways depending on how you look at what is being said. Does the USDOT mean that HSR will take people off the road in four wheelers and by that it will lessen the transportation congestion?

Or is the USDOT talking about adding better and more efficient railways in order to start moving freight by rail more than it is now – ultimately removing trucks from the highways – and making roads safer? As the USDOT seems to think that trucks and the drivers on the roads are unsafe – evident by all the changes they are trying to implement – even though accidents and fatalities are at the lowest point ever since they started keeping records of accidents.

Plus the CVSA released a report from the “Road Check 2010″ that was recently held saying – Results from the Commercial Vehicle Safety Alliance’s (CVSA) Roadcheck 2010 reveal that the commercial motor vehicle (CMV) industry is hovering close to the record low out-of-service (OOS) rates set during 2009. The rail industry boast that a train can move a ton of freight an average of 436 miles on a single gallon of fuel. That sounds really good and all, but in order for the train to get to this figure it must stay loaded at all times. Will trains completely remove trucks from the road? The answer is no, as trains do not make store deliveries.

But this administration says that opening the border would generate more hauls for US truck drivers as they would be allowed to deliver and pick-up within Mexico hauling loads back into the US. But this administration will not secure the border and lessen the violence taking place daily – as not to offend the Latino Americans – resulting in votes lost. I bet I would be safe in saying that the freight going into Mexico is cheap and the loads would not pay as much as they do now.

How about the oil spill? This administration is on a big push to create jobs – but in recent news we have learned a lot of these jobs were in fact temporary jobs – are they also counting the thousands of jobs created by the oil spill clean up? This administration wants to stop the drilling for oil in the Gulf of Mexico – our oil. But also wants to lessen the dependency of foreign oil? I’m not sure of the figures of the percentage of oil from the gulf that goes to actual usage in the US.

One figure I saw was 32% and another was 10% but nonetheless any amount would be better than the US buying it from another country. In theory how would be the best way for the president to get the US away from its dependency on oil – the oil spill? If he was to keep putting off getting this oil spill under control – then more and more people get frustrated with the spill ultimately pushing them to alternative fuels – resulting in the people on the left and the independents getting what they have wanted – alternative energy. This of course is just my theory, but I imagine I am not the only person thinking this way.

I'm just a EX-truck driver, trying to pass along a little information. I been in the Trucking Industry as a driver for over 15 years. I have driven both as an owner operator and as a company driver. I have also been a driver instructor for an accredited truck driving school in KY. I am no longer a truck driver, but I consider myself to be a watchdog for the trucking industry. In fact this site is the #1 site for getting the real news about trucking. We don't hold back here, you will hear the full story. Twitter | |Truck Drivers News Facebook
View all posts by admin →
This entry was posted in conservative trucking and tagged east corridor, high speed rail, high speed service, list, Obama, oil, political expert, rail projects, road, top ten list, truck, Truck Drivers, york pennsylvania. Bookmark the permalink.