Recovery Act – ‘If It Was Good’ – Why Keep Accentuating It 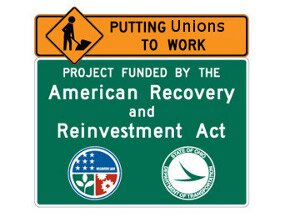 If the Recovery Act – that the Secretary of Transportation keeps proclaiming about was a good idea for the economy – why must he keep reminding everyone?

Is it because those that were in favor of it are not sure about it? Or is it the apprehension that not very many would back it? I always thought that if it was a good idea then there would be no need for the reminders.

It is uncanny that those that favored the recovery act – keep ‘reminding’ us about it – telling us all these things that could not have been possible without spending billions of dollars. But then the Bureau of Labor Statistic reports unemployment has not changed much like we have all been told it would – if this money was spent. It is disheartening to keep reminding us of the foolhardiness of the Obama administration.

‘If it were a good concept, then I don’t believe it would need to be emphasized so much. It’s almost as if the Secretary is uncertain of the recovery act himself and keeps highlighting it, trying to force an artificial effectiveness on those who are not convinced, that it is working. When there are those of us that are living in the reality that it didn’t or has not worked.

I just wonder when these foolish people in power will awaken from their fairy tale trip to dreamland and realize they have screwed up this country to the point of no return – in 2012? The ‘summer of recovery’ as the Secretary keeps exclaiming won’t go down in history as a medal winner. It will however go down in history as the biggest downfall – ’2010 summer of decay’. With the Senate making their dismal decisions as of late, e.g., not passing the earmark ban, and the passing of the FDA Food Safety Modernization Act – we are setting ourselves up for yet again – another failure.

I'm just a EX-truck driver, trying to pass along a little information. I been in the Trucking Industry as a driver for over 15 years. I have driven both as an owner operator and as a company driver. I have also been a driver instructor for an accredited truck driving school in KY. I am no longer a truck driver, but I consider myself to be a watchdog for the trucking industry. In fact this site is the #1 site for getting the real news about trucking. We don't hold back here, you will hear the full story. Twitter | |Truck Drivers News Facebook
View all posts by admin →
This entry was posted in conservative trucking and tagged Act, advertising, apprehension, billions of dollars, blog, bureau of labor, bureau of labor statistic, economy, fairy tale, idea, money, need, new health care, point of no return, recovery act, reminders, secr, Secretary, Secretary of Transportation, small businesses, statistic reports, tax breaks, Taxes, unemployment. Bookmark the permalink.