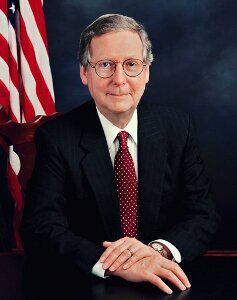 I recently contacted both my senators here in Kentucky and have received a reply from Senator Mitch McConnell.

I’m sure this is probably the same “canned message” that anyone would get, but I thought i would share with you what he thinks about the Mexico cross-border issue.

If I am understanding the letter right, it looks as if Senator Mitch McConnell doesn’t see any problems with allowing the unsafe Mexican Trucks into the US.

But, in an article I read dated May 27th, 2007 titled “Congress Votes to Put Brakes on Mexican Truck Program” Jacqueline Gillan, vice president of Advocates for Highway and Auto Safety is quoted as saying, “Two congressional hearings examining the plan to allow trucks from Mexico to travel beyond the border zones uncovered serious safety deficiencies and deemed the pilot program a complete sham and in violation of existing law.”

I found this announcement from the US Department of Transportation dated February 23rd, 2007.

Secretary Peters noted that the Department of Transportation has put in place a rigorous inspection program to ensure the safe operation of Mexican trucks crossing the border. Yesterday, Peters and Mexican Secretary of Communications and Transportation Luis Téllez announced a program to have U.S. inspectors conduct in-person safety audits to make sure that participating Mexican companies comply with U.S. safety regulations. The regulations require all Mexican truck drivers to hold a valid commercial drivers license, carry proof they are medically fit, comply with all U.S. hours-of-service rules and be able to understand questions and directions in English.

Secretary Peters said those Mexican truck companies that may be allowed to participate in the one-year program will all be required to have insurance with a U.S. licensed firm and meet all U.S. safety standards. Companies that meet these standards will be allowed to make international pick up and deliveries only and will not be able to move goods from one U.S. city for delivery to another, haul hazardous materials or transport passengers.

The first Mexican trucks to be authorized under the program will begin traveling beyond U.S. border areas once the initial in-person safety inspections are done and proof-of-insurance verified. Secretary Peters noted that with the announcement of the program, Mexico will begin to consider applications from U.S. trucking firms for licensing rights to operate within Mexico. Approximately 100 U.S. operators would be licensed by Mexico for cross-border operations.

OOIDA and several safety oriented groups have repeatedly said Mexican trucks are unsafe and should not be allowed to operate in the US until they can comply with our safety standards. In an article from OOIDA dated February 26th, 2010:

To date, there have been no reports from the Federal Motor Carrier Safety Administration or from Mexican officials as to what efforts Mexico has made to comply with the regulatory items stipulated to them for gaining access to U.S. highways. Those items include safety regulations such as comparable drug and alcohol testing, commercial drivers licensing and tracking, and hours-of-service requirements, among other issues.

So what reports did Senator Mitch McConnell read?

In another recent article from OOIDA Director of Government Affairs Rod Nofziger said: “It is imperative that lawmakers consider their obligation to any sort of program from all angles,” Nofziger said. “It’s absolutely urgent that truckers call their lawmakers and explain the serious ramifications that opening American roads to Mexico-based truckers will have on them and the entire U.S. Our lawmakers need to hear that simply throwing up their hands and opening the border is not an option.”

To contact your Representative, call the U.S. Capitol switchboard at (202) 224-3121, tell the operator that you want to speak with your Congressman and provide the operator with your home zip code.

I'm just a EX-truck driver, trying to pass along a little information. I been in the Trucking Industry as a driver for over 15 years. I have driven both as an owner operator and as a company driver. I have also been a driver instructor for an accredited truck driving school in KY. I am no longer a truck driver, but I consider myself to be a watchdog for the trucking industry. In fact this site is the #1 site for getting the real news about trucking. We don't hold back here, you will hear the full story. Twitter | |Truck Drivers News Facebook
View all posts by admin →
This entry was posted in Uncategorized and tagged Advocates for Highway and Auto Safety, announcement, border, Cross, licensing, operator, safety inspection program, secretary peters, senator mitch mcconnell, unsafe mexican trucks. Bookmark the permalink.

One Response to Senator Mitch McConnell – Cross Border with Mexico