This is the life. We all have to be somewhere. This is my life. Guest post by Jean McHarry

Hey! Todd here. Today I’ve got what can only be described as a guest blog post within a guest blog post. I won’t be the one entertaining you today. Let me explain. You and I both know I’m a blabbermouth, but sometimes I just don’t know what to say about a particular subject. I had one of those cases back in July of 2010 with a post called Riding Along.

This post was written due to a question I got from Lucinda, a woman who was planning on riding along with her trucker husband, but only as a passenger. She was asking for advice. Well, I’ve never done that and neither had The Evil Overlord, so I enlisted the help of a couple of Twitter friends. Patty, a.k.a. @luv18wheels and @CB_SnowAngel (who apparently has given up on Twitter) gave some sound advice, but I knew I’d want more eventually. That’s how we arrived today at my first guest post.

I don’t plan on doing this a lot, but I thought I knew someone who could both answer the question better than I could and reach meet my required level on the Snark-O-Meter. Recently, I decided to hit up Jean McHarry, a.k.a the infamous @raysunshine77 on Twitter. She’s a first class smart aleck on Twitter and she always cracks me up with her sarcastic sense of humor. I’m also beginning to wonder if she’s a long lost sister of The Evil Overlord. After much manipulation (I lied and told her I liked her), she finally acquiesced. I think you’ll be glad she did. She did a bang-up job on what she admitted was her first writing assignment since high school. I’ll let her introduce herself. That’s her standing next to her devastatingly handsome husband. Love that macho mustache. Hey, wait a second…

This is the life. We all have to be somewhere. This is my life. 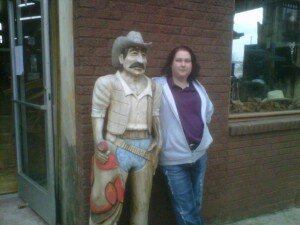 Don’t call me a seat cover! Don’t assume I’m a lot lizard! Don’t disrespect me because you don’t want women taking away a man’s job! Don’t accuse me of not having knowledge of this industry because I ride! Don’t ask me to run away with you cause you have a bigger, badder truck! And for the love of all that is chrome, don’t ask me to move the stupid truck!

I have driven, I’ve dispatched, I’ve loaded and unloaded trailers and I’ve run a truck stop. DOT assumes I’m a driver and will sometimes ask for my log book. I have to produce paperwork to show that I am allowed to be here, that I won’t do anything that would be considered work and I pay for this privilege. I love my life, I love being out here on the road. I enjoy every aspect of being a truck driver except I don’t drive the truck and let’s make this clear, I don’t want to drive the truck and no one is going to make me.

My husband has diesel running through his veins. He says it’s all he ever wanted to do (that’s a small lie, he also wanted to be a train engineer or a boat captain) and I believe it’s all he’ll ever do. I enjoy being out here. I love going new places, meeting new people and just being a little bit of a gypsy. Waking up someplace new and not knowing where I’m going to be tomorrow is a thrill that I truly appreciate. I am a passenger. That’s all I want to be.

I call myself a rolling assistant because I do more than just sit here and look pretty. I spend about a quarter of my time playing navigator. Between maps (both truck and city versions), a functional GPS, the company’s routing, the local directions, and my notes on the local directions, I can tell where we’ve been, where we’re at, where we need to be going and just how long it should take to do it all. This knowledge also helps me with keeping an eye on the weather. Twitter really has been my best friend in this endeavor. Those up to the minute updates that tell me it’s raining in Texas helped a whole lot when we were dealing with blizzards in Buffalo. I keep track of loads and payroll, keep up on all relevant news and generally just keep him company.

I cook. That sounds so simple when you type it. Is there any way to make it simple in the truck? We don’t have a refrigerator, so storage of perishables must be done in a cramped cooler that also holds our water. Canned goods have one cabinet available to them and it can’t be opened without something landing on a foot or head. I carry a crock pot, a lunchbox (it’s shaped just like those old lunch boxes your dad took to work and functions kind of like a crock pot) and an electric skillet. One of these days when I find room, I want a rice cooker but at this point something else has to move out for it to have a home.

We try to eat out of the truck for 18 out of 21 meals. Sometimes we accomplish this, most weeks it’s closer to 14 out of 21. Sometimes, we just need out of the truck. It’s not like eating dinner at the house. Imagine you had to eat every meal with your spouse in the bathroom (just throw a mattress over the tub and put the lid down on the toilet). At some point, you would need a break. Restaurants have so much more space and other people to help carry on conversations. These two luxuries can make a really long day seem like a vacation. Because when there are just two of you, there is only so much to be said and quite frankly if he asks me one more time “whatcha doing?”, I might hit him with a tire thumper.

I clean. That’s another one of those things that sounds so simple but is never as simple as you want it to be. Mirrors need to be cleaned. Glass on both the inside and the outside. Dusting (I hate dust and in a truck, the stuff just reappears the moment you knock it off). To sweep and mop (something I try to do every other day) requires half the truck be picked up and put someplace else while I accomplish such an easy task. The cooler (loaded down with ice, half a case of water and whatever perishables have been purchased for the week), the crock pot, the lunchbox oven, the trash can, 4 pairs of boots, 3 pairs of tennis shoes and the rugs. They must go somewhere. I just wish I knew where. The bed is already loaded down with luggage, a shower bag, my purse, laundry baskets, and a dozen bags of other stuff that one of these days will eventually find a home. Once the floors are all pretty, it all has to be put back. At least until bedtime. Then everything has to be moved back up front so we can sleep.

My goal is to try to make his load a little lighter, especially since I increase the weight of the truck (I have to bring a lot of stuff). Didn’t you see all the stuff I just mentioned? I’d like to have so much more, but there will never be room and I probably wouldn’t use it if I finally got it in here. My resolution each year is to try that whole minimalistic lifestyle. One of these years, it’s gonna happen. Trust me.

I spend my day trolling for news articles to read to him. I download podcasts that we both enjoy to kill the hours of driving. There is only so much music and news you can listen to in an 11 hour day. Even less now, since every hour the whole thing seems to repeat. We joke, we tease, we argue, we repeat.

I spend a huge chunk of my day online. I harass people I’ve never met (and some I never will) on Twitter. I stalk people I do know on Facebook. I farm and tame the frontier. I troll truck driving and cooking forums. He used to complain that I spent most of my day on the computer and phone. He’d ask what could I possibly be doing that would waste 7 hours a day. Why wasn’t I looking at the beautiful scenery and enjoying just relaxing while he drove? Why wasn’t I paying more attention to what was going on around us? That’s what he does. Why couldn’t I do that? I tried to explain.

From my side, with no vehicle to control, just looking at scenery that I’ve seen 100 times isn’t entertaining. It’s like staring at a wall. Now when we go home, I drive. That’s 8 to 12 hours, depending on who we are going to visit. He whines the whole time that he’s bored. I tell him to relax and enjoy the scenery, pay more attention to what’s going on around us. That’s how I get new toys.

I’d like to say we are unique, but that wouldn’t be true. I know plenty of couples out here that are in the same boat we are; one drives and one rides. Anybody that has met him will ask how I spend 24/7 with him. I am heavily medicated. All kidding aside, we love each other and we take care of each other and we are co-dependent on each other. We’ve spent time apart. I didn’t like it. He didn’t like it. I respect couples that team. I respect women that stay at home while their husband is out here on the road. I’ve been there, done that and I don’t plan on going back.

*Todd here again. Please leave your comments and/or questions here and I’ll make sure Jean sees them. You can also contact her directly through Twitter @raysunshine77, email her at [email protected], or check out her Facebook page. I hear she also doesn’t mind the occasional stalker.

I've been truckin' since 1997. Sometimes I love it and sometimes I hate it. Speaking of being fickle, my wife, affectionately known as The Evil Overlord was my co-driver for 9 of those years. And yet somehow, I'm still alive. ;-) I write a blog about a trucker's life on the road and anything else that tickles my innards. And I take myself very, very seriously. If you're still reading this, you can find me on: Twitter | | About Trucking Jobs
View all posts by Todd McCann →
This entry was posted in Truck Driver Industry, Women in trucking and tagged blabbermouth, blog, Cb, Disrespect, evil overlord, handsome husband, husband, job, lizard, lot lizard, Lucinda, Manipulation, Mustache, passenger, post, sarcastic sense, Seat Cover, Sense Of Humor, smart aleck, Snark, snowangel, Sound Advice, truck, trucker, Twitter. Bookmark the permalink.

One Response to This is the life. We all have to be somewhere. This is my life. Guest post by Jean McHarry