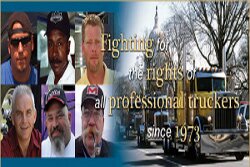 The Owner-Operator Independent Drivers Association, OOIDA, thanked the U.S. House of Representatives on behalf of all truckers today for passing an amendment that would block the Department of Transportation from advancing regulations mandating electronic on-board recorders, event data recorders and global positioning system tracking of commercial and personnel vehicles.

The amendment to the annual transportation funding appropriations bill being debated in the House right now, is headed by U.S. Representatives Jeff Landry, R-LA and Nick Rahall, D-WV, and co-sponsored by Jaime Herrera Beutler, R-WA, Tom Graves, R-GA and Bill Huizenga, R-MI. It would strip funding from the electronic on-board recorder mandate included the conferenced highway bill negotiated earlier this week. As written in the bill, EOBRs would be capable of real-time tracking for monitoring of long-haul trucks and drivers.

“We’d like to thank the co-sponsors for their bipartisan opposition to the mandate,” said Todd Spencer, OOIDA executive vice-president. “We also thank those who worked against the EOBR mandate in the highway bill, including Leonard Boswell, D-IA and James Lankford, R-OK. We commend them all for recognizing the negative consequences of mandating EOBRs and for their hard work in stepping up to correct the situation.”

OOIDA is the largest trade organization representing small-business truckers, who comprise the vast majority of the trucking industry. The Association and its members see no reason for the costly government surveillance that such a mandate would entail.

A regulatory version of an EOBR mandate was struck down by a federal Court of Appeals for the Seventh Circuit because the FMCSA failed to deal with the harassment of drivers. Noted in that ruling was the fact that no research has shown how such a mandate would do anything to improve highway safety.

“We also thank our members for their overwhelming support and hard work in helping get this amendment passed,” added Spencer.

The Association also contends EOBRs are the last thing a struggling trucking industry needs right now. The current EOBR rulemaking has been estimated by the Obama administration to cost the industry $2 billion if enacted.

I'm just a EX-truck driver, trying to pass along a little information. I been in the Trucking Industry as a driver for over 15 years. I have driven both as an owner operator and as a company driver. I have also been a driver instructor for an accredited truck driving school in KY. I am no longer a truck driver, but I consider myself to be a watchdog for the trucking industry. In fact this site is the #1 site for getting the real news about trucking. We don't hold back here, you will hear the full story. Twitter | |Truck Drivers News Facebook
View all posts by admin →
This entry was posted in trucking news and tagged appropriations bill, Association, Beutler, Bill, bipartisan opposition, Data Recorders, FMCSA, funding, global positioning system, Government Surveillance, highway bill, Huizenga, Independent Drivers Association, Lankford, leonard boswell, long haul trucks, mandate, Negative Consequences, nick rahall, ooida, Seventh Circuit, Todd Spencer, Tom Graves, trucking industry, work. Bookmark the permalink.