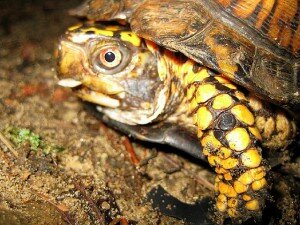 So why would I go out of my way to help a turtle cross the road? Well, like I said, they’re cool, but it’s also because The Evil Overlord likes that about me. What can I say? I’m a sweetie. Still, the main reason is simply because he’s so freakin’ slow. By the way, I do always assume it’s a male turtle crossing the road. My thinking is that the only thing that could make a turtle jump out into traffic is a lady turtle batting her eyes and wiggling her sexy little tail around.

Whether your vehicle has 18 wheels or four, we’ve all experienced a Turtle Race. You’re tooling along in the fast lane, when some trucker jumps out in front of you. You calmly slow down and follow while this truck slooooooowly creeps up and passes the slightly slower truck. I assume you were calm, right? I mean, it only took five minutes for dillmunch #1 to pass dillmunch #2.

Notice that I called both of these drivers “dillmunch.” Besides the fact that I have no earthly idea what a dillmunch is, I still say the turtle race was both of these driver’s faults. It takes two to do the Tango and it takes two to race. If you were to ask most drivers whose fault it is, they’d blame the guy trying to pass. I agree… and I disagree. Let’s take a look at that.

Okay. Say my truck will go a mind-blowing warp speed of 65 mph. I’m coming up on a truck going 64 mph. Sure, I could tap my brake, lower my cruise control, and stare at his trailer doors all day. After all, I am looking pretty smokin’ in those reflective doors. But why should I have to slow down because my truck is faster than his? Wouldn’t it make more sense to let the faster truck get on with his business?

The thing is, it takes two drivers with common sense, professional attitudes, and the willingness to put themselves in the other driver’s shoes. Those are three attributes that are sorely missing in today’s trucking industry. Nowadays, everyone is out for themselves.

Drivers can’t be bothered to let you go around them before they take ten minutes to back into a wide-open parking spot. The same guys don’t have a second thought about butting in line to get to the shipping clerk’s window. Nor do they mind parking in front of the fuel bay while they mosey into the truck stop, stand in line to get their fuel receipt, take a dump, fill up their thermos, and grab some to-go food; hopefully in that order.

These are the same drivers who see the faster truck coming up behind them. They’re the drivers who see you in their mirror as you pull out to pass. The same jerk who can see the traffic stacking up behind you. The worthless puddle of dog vomit that refuses to tap his brakes, even though he can clearly see you’re going to pass him eventually.

Here’s how I try to deal with this. First, I give the driver the benefit of the doubt, trusting that as soon as he notices me, he’ll let me around. Hey, it could happen. Once I’ve caught his beady little eyes looking at me in his mirror, I wait a few seconds to see if he’s gonna back out of it. If he doesn’t, I resort to a drastic step. Well, it is for me anyway.

I break out the “Official Communication Device of Hell”, otherwise known as the CB radio. Again, I’ll be nice at first. Maybe he’s into a good audiobook and the situation just hasn’t registered in his puny little brain. I’ll key up the mic and say in a friendly voice, “Hey driver. How about a little driver courtesy here?” Sometimes that works. Other times, the guy doesn’t have his CB turned on. Can’t say as I blame him for that. Still other times, you know you’ve got a real winner on your hands when he picks up the mic and says, “If you can’t pass me faster than that, it’s not my problem.” Oh my. What do you do with a guy like this?

That’s when I take a deep, calming breath and explain to him that we as drivers are never going to get respect and cooperation from the public if we can’t even get it from our fellow drivers. I’m often filled with awe from their insightful comeback. Something truly wise, like, “Shut up, stupid.”

This is what we’re dealing with out here. All this could be avoided if drivers just had a little common courtesy towards each other. Instead, we’re all faced with turtle racing every day. And as for you four-wheelers, don’t think you’re exempt either. The only thing more frustrating than being stuck behind turtle racing trucks, is to be stuck behind turtle racing four-wheelers. For the love of Pete, folks. Trust me on this. It’s okay to turn your cruise control off. The car manufacturers have thoroughly tested these devices. You’re not gonna break anything. Except for my forehead, which is decisively bashing into my steering wheel with a head-banging force usually reserved for Slayer songs.

So here’s my plea to all drivers. Just get off the road and let me do my job. Okay, I guess that’s a bit impractical. So practically, let’s do this.

If you think I’m totally off-base here, or you’ve got some good tips to avoid turtle racing, please share them in the comments section. Also please give this post a star rating. I’m sorry, but the button seems to be broken. It appears that only 5 stars are being accepted at this time. HeeHee And please share this post on whatever social network that sucks up waaaaay too much of your time.

I've been truckin' since 1997. Sometimes I love it and sometimes I hate it. Speaking of being fickle, my wife, affectionately known as The Evil Overlord was my co-driver for 9 of those years. And yet somehow, I'm still alive. ;-) I write a blog about a trucker's life on the road and anything else that tickles my innards. And I take myself very, very seriously. If you're still reading this, you can find me on: Twitter | | About Trucking Jobs
View all posts by Todd McCann →
This entry was posted in Truck Driver Industry and tagged 18 wheels, accelerator, dillmunch, Dudes, earthly idea, evil overlord, Fast Lane, five minutes, guy, mutant ninja turtles, Race, Sweetie, Tango, teenage mutant ninja, teenage mutant ninja turtles, Tongue, tru, truck, trucker, trucking industry, trucks, Turtle, turtle race, Turtles, way. Bookmark the permalink.