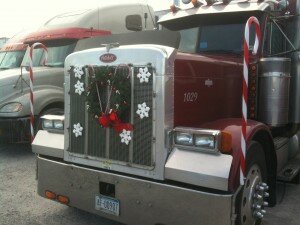 Well, it’s that time of year again. Christmas is here and you and your brother have finally settled out of court over that ugly turkey drumstick incident. The house is filled with holiday cheer. Everyone is happy to be together while they snort chocolate shavings, smoke cookie dough, and mainline eggnog.

But what about those truckers who didn’t make it home on Christmas Day? Well, I’ve written a poem in their honor. I hope it puts you in a Christmasy kinda mood. Here goes nothing. Pick your poison. You can listen to me or read it yourself. Enjoy!

Twas the night before Christmas and all through the truck,

the only thing stirring was a case of bad luck.

The stockings were hung by the chimney with care,

but thanks to my job, I wasn’t there.

The nephews were nestled all snug in their beds,

While visions of Modern Warfare 3 danced in their heads.

With The Evil Overlord at home in her teddy (hey, it’s my poem) and I on the road,

We had both settled down to take off a load.

When outside my truck there arose such a clatter,

I sprang from the bunk to see what was the matter.

I reached for my clothes, knowing I was certain,

Prepared for the worst, I opened the curtain.

The moon in the sky gave off such a great glow

It made the parking lot look like it was covered with snow.

When what to my wondering eyes should appear,

But a flatbed loaded with big green John Deeres.

With the driver outside looking at my truck,

I knew right away I had more bad luck.

As I jumped outside to check out my bumper,

Something flew over my head and then took big dumper.

My luck continued as I took it in the eye,

It was such a huge load it almost made me cry.

As I looked to the sky I swore I heard a jingle,

I took cover and prayed it didn’t need to tinkle.

Alas, I did not see what dumped on my head,

But I thought I glimpsed something that might have been red.

I thought, “Could that have been good old St. Nick?”

Nah, couldn’t be. My eyes had just played a trick.

So back to my problem, the wreck, not the poop.

I called my Nazi safety department to give them the scoop.

We exchanged information and he went on his way,

I guess he was too embarrassed to back in and stay.

Next thing you know I was getting a call,

The Evil Overlord sounded like she was about to bawl.

He didn’t seem too happy that he burned his caboose.

He was all dressed in fur, from his head to his foot,

And his clothes were all covered with ashes and soot.

She said, “Why would a man be wearing so much fur?”

“I bet he’s one of those drag queens, Do I call him sir?”

“His eyes-how they twinkle! His dimples how merry!”

“This dude must be wasted, I’m guessing it’s cooking Sherry.”

His droll little mouth was drawn up like a bow,

And the Sherry had stained his beard, like a dead deer in the snow.

The stump of a pipe he held tight in his teeth,

He had a broad face and a big ol’ gut,

Every bit of him was fat, yes, even his butt.

He was chunky and plump, a right jolly old guy,

A wink of his eye and a shake of his head,

“Are you kidding me, perv, not even if I were dead!”

He spoke not a word, but went straight to his work,

And filled all the stockings with Doritos and beef jerk.

And laying his finger aside of his nose,

And giving a nod, up the chimney he rose!

He sprang to his sleigh and they lurched into flight,

As she leveled the shotgun, she had him in sight.

As he started to exclaim, she squeezed off a shot,

“That’ll teach you to let your reindeer poop in my husband’s eye!”

*If you enjoyed this little ditty, please give this post a good rating and tell all your friends to check it out. If you didn’t enjoy it, keep your rating to yourself and your trap shut.*

I've been truckin' since 1997. Sometimes I love it and sometimes I hate it. Speaking of being fickle, my wife, affectionately known as The Evil Overlord was my co-driver for 9 of those years. And yet somehow, I'm still alive. ;-) I write a blog about a trucker's life on the road and anything else that tickles my innards. And I take myself very, very seriously. If you're still reading this, you can find me on: Twitter | | About Trucking Jobs
View all posts by Todd McCann →
This entry was posted in Truck Driver Industry and tagged all snug in their beds, Bad Luck, Chimney, chocolate shavings, Christmas Day, Christmasy, Clatter, Cookie Dough, Eggnog, Evil, evil overlord, holiday cheer, home, home on christmas day, Huge Load, john deeres, luck, Modern Warfare, Nephews, night before christmas, truck, trucker, truckers, turkey drumstick. Bookmark the permalink.