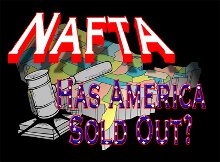 I have written on this subject several times – but where is the outrage? Mexican trucks are coming to the U.S. very soon – quite likely before the end of the month. Calls, and or letters/faxes need to be sent to your lawmakers – they need to hear from their constituents, this does not just affect certain states, but this will effect all of the United States. Why you ask?

“U.S. truck-drivers and carriers must contend with ever-increasing safety, homeland security and environmental regulations that dramatically affect their costs of operations as well as their ability to make a living at their chosen profession,” said Todd Spencer, Executive Vice President of OOIDA. “Mexico does not have an even remotely equivalent regulatory regime for its trucking industry and should not be given de facto exemptions.”

In 1995 the U.S. and Mexico started a pilot program to allow Mexican trucks to travel throughout the US delivering loads brought in from Mexico. The US trucks were allowed to do the same in Mexico, but environmental issues, safety and security concerns spurred the United States to bar Mexican trucks from being on U.S. roadways.

There has been no indication from the Federal Motor Carrier Safety Administration (FMCSA) or the Department of Transportation (DOT) or from Mexico that any of these environmental issues or safety and security concerns have been addressed. 16 years later the environmental issues and safety and security concerns still exist, but Obama agreed to allow the Mexican trucks back into the US and at a price too. These Mexican trucks are to be fitted with Electronic on-board recorders (EOBR) that taxpayers in the U.S. are to pay for.

An electronic on-board recorder (EOBR) is an electronic device attached to a commercial motor vehicle, which is used to record the amount of time a vehicle is being driven.

The driving hours of commercial drivers – truck and bus drivers – are regulated by a set of rules known as the hours-of-service (HOS). The HOS are rules intended to prevent driver fatigue, by limiting the amount of time drivers spend operating commercial vehicles.

The prior pilot program only allowed 100 Mexican carriers to do business beyond the border zone in the United States. This time around the program has no set limit on the number of carriers or number of trucks to be allowed into the U.S. – provided they can pass an inspection of their trucks and the accreditation of their operators.

The new cross-border trucking plan will happen in three stages: The first stage will be the application and inspection of the Mexican trucks and the accreditation of their operators. The second stage starts with a three-month period of thorough inspections of the vehicles crossing the border, checks that will decrease starting the fourth month. The final stage involves the Mexican companies being notified of their permanent authorization, which can be granted after 18 months of successful operations. This authorization can only be revoked if a safety regulation is broken.

Here is a kicker, Mexico reserves the right to re-introduce its illegal tariffs if any parts of the agreement are violated by the United States. Strong arm tatics, and the U.S. does not have the guts to stand up to them.

The fact that a cross-border program is in any stage of development does not sit well with the Owner-Operator Independent Drivers Association (OOIDA) leadership. “With all the talk about the need for every initiative to create jobs, it’s absolutely shocking,” said OOIDA Executive Vice President Todd Spencer. “The only jobs this ill-conceived idea can create are for non-citizens who will take jobs away from U.S. citizens.”

So guess what needs to be done now? Yes, that’s right get on the phones and call your senators and representatives and demand them to kill this deal now. You can call the United States Capitol switchboard at (202) 224-3121 provide the operator with your home zip code and they will connect you directly with the Senate office you request.

If you as a U.S. truck-driver value your job or any concerned motorist on the highways – then you must contact your Senators and Representatives and explain to them why this is not a good idea. It is ironic that the DOT is always talking about how their number one priority is Safety – then they do this.

There are many different reasons why a trucking program with Mexico is a bad idea. The following are just a few things that public officials need to know:

CALL NOW AND KEEP CALLING UNTIL LAWMAKERS REALIZE JUST HOW BAD AN IDEA THIS REALLY IS!

I'm just a EX-truck driver, trying to pass along a little information. I been in the Trucking Industry as a driver for over 15 years. I have driven both as an owner operator and as a company driver. I have also been a driver instructor for an accredited truck driving school in KY. I am no longer a truck driver, but I consider myself to be a watchdog for the trucking industry. In fact this site is the #1 site for getting the real news about trucking. We don't hold back here, you will hear the full story. Twitter | |Truck Drivers News Facebook
View all posts by admin →
This entry was posted in conservative trucking, trucking news and tagged bus drivers, commercial drivers, Electronic Device, Environmental Issues, federal motor carrier, Federal Motor Carrier Safety Administration, FMCSA, idea, Mexican Trucks, motor, motor carrier safety, motor carrier safety administration, number, ooida, pilot program, Regulatory Regime, Roadways, safety and security, security, security concerns, Todd Spencer, transportation dot, Trucking, trucking industry, us trucks. Bookmark the permalink.